She is the Palm Beach Elections supervisor responsible for the 2000 Butterfly Ballot. Below is her choice for the 2004 ballot.

From the butterfly ballot to the broken arrow, Supervisor of Elections Theresa LePore is setting up the county for another election meltdown potentially, said the Delray Beach retiree, who was communications director for Children’s Hospital in Miami and a communications specialist for the Palm Beach County School District.

Kemp and others wonder why LePore had to complicate matters by using the broken arrow when voters could be asked simply to fill in a circle to indicate their vote, known as bubbling in.

”People have to bubble in a lot of things today, but I’ve never seen where you have to connect an arrow,” he said.

It looks simple enough — but apparently it is confusing to some, and no other counties in the area are doing it that way. Most are using the bubbles.

They watched as he did U-turns, put the car in reverse and then in drive again as he made his way through the neighborhood. Kobi was only in the car for a few minutes, but it seemed much longer, [his mother] said.

“He used his turn signals and stopped at the stop signs.”

Kobi told his mom that his Cadillac adventure was fun. But after a face-to-face with police down at headquarters, Kobi changed his tune.

“I was scared,” said Kobi, who, at just around 3 feet tall, could not explain how he could reach the brake and accelerator and see over the dash to drive. But he did explain why he wore a seat belt.

“I didn’t want police to pull me over,” Kobi said. 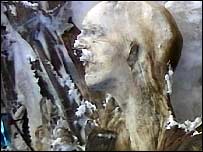 The Reuters article admits the soldiers aren’t alive, but it neglects to mention anything about harvesting their DNA.

“When I got close I discovered they were the bodies of soldiers frozen in the glacier. Nothing like this has ever happened in my lifetime. Bodies haven’t been found in the ice around here for decades.” — Mountain rescue worker Maurizio Vicenzi

But a few decades ago it was a regular occurrence?

A Muslim Swiss citizen has had his US Visa withdrawn.

He was supposed to come to Univ of Notre Dame as a professor of Religion. The visa was issued in May, but withdrawn at the beginning of August, days before he was going to leave with his family.

Ramadan, a well-known intellectual in France and Switzerland, said although he had been told he could reapply, there was little point in doing so until he knew why approval had been withdrawn this time.

“We need that information,” he said, adding that his main concern at the moment was for his family, who had been left in a difficult position by the U.S. about-turn.

“It is very distressing for them. All our things and furniture have already been sent (there),” he told Reuters. “We are living in an empty house.”

Ramadan, who has advised the European Commission on religious issues and addressed conferences sponsored by the State Department, traveled without problems to the United States in April with his wife and four children to choose a house and schools.

A lot of people have discovered that they can make a little extra money by auctioning off on the internet those extra knick-knacks they have lying around. After all, as the saying goes, one person’s trash is another’s treasure.

But sometimes, trash is just trash.

This site is dedicated to the research and study of the most bizarre items found for sale on internet auction sites. Not the obviously fake auctions, like the infamous human kidney, but truly tacky stuff that people really, honestly, believed that someone would (and in some cases did) buy.

“Lynne and I have a gay daughter, so it’s an issue that our family is very familiar with. … With respect to the question of relationships, my general view is that freedom means freedom for everyone. People ought to be able to free — ought to be free to enter into any kind of relationship they want to.” — VP Dick Cheney

“Cheney went on to repeat the position he first outlined in the 2000 campaign — that same-sex marriage should be left to the states to decide. He noted, however, that Bush has endorsed a constitutional amendment preventing the states from recognizing such marriages.”

“At this point … my own preference is as I’ve stated,” Cheney said. “But the president makes basic policy for the administration. And he’s made it. ”

Rep. John Lewis (D) Georgia has also been stopped several times at airports and told he couldn’t get a ticket because he was on the No-Fly list.

Rep. John Lewis (D) Georgia has also been stopped several times at airports and told he couldn’t get a ticket because he was on the No-Fly list.

Should a public school be allowed to start a board meeting with a
prayer, when everyone present is an adult?

The Rutherford Institute says yes, the ACLU says no.

I know even as an adult, if I were at a meeting that began with a prayer that referenced a God I didn’t believe in, I would feel like an outsider. And a public school board meeting “ought to be” welcoming to all parents. But where do we draw the line between “ought to be” and “required by law?”

What recourse would a public school parent have if they felt ostracized at such meetings besides the law? It’s not as if they can take their kids to a different public school.

These are my thoughts, and basically why I tend to side with the ACLU.

I lie somewhere between the ACLU and the Rutherford Institute on most issues regarding religous freedom. Closer to the ACLU. But I have no problem with “moments of silence” or “bible study groups” as an optional afterschool activity. (Both stands of which might surprise some of my Liberal friends and relatives.)

My only problem with school prayer is when it becomes mandatory or organized.

Allegedly all Employees at ILM (LucasFilm’s Industrial Light and Magic) have signed Non-disclosure agreements regarding the possibility of a Star Wars episode 7,8 & 9

When Lucas originally made the first three movies (numbered 4, 5, and 6 just to confuse any non-fan), he said there would be nine films.

When he made the fourth film a few years ago (Numbered 1), he denied ever saying this. When the interview transcripts were produced, he still maintained the last set of movies wouldn’t be made.

Now that we are approaching the release of episode #3 or #6 (depending upon how you count), he’s probably asking himself what he is going to do afterwards. And Episodes #7-9 are looking more and more appealing. (Just one hypothesis)

If he does make them, at least everyone will agree on the numbers to assign to them.