I was at an open mic last night. It’s called the Chippewa Chapel Travelling Guitar Circle and Medicine Show. When Frederick’s Music Lounge closed down, their popular weekly Hootenanny/Open Mic went on the road. Last night it was at the Venice Cafe. I wasn’t there long – as I had to get up early for work, but it was enjoyable. And the host said poetry was permissable (Fred preferred Music) so at some point in the future I might bring some poetry there to read.

I also might drop by The Venice on one of their Monday night open mics, but I haven’t been there for awhile either since like Friday mornings, I have to be at work early on Tuesday mornings too. (The Aalim Belly Dancers perform on occasional Monday nights immediately prior to the open mic…so I might look at the calendar and choose one of those nights.)

In a few minutes I will be heading to the Hartford Coffee Company for their weekly open mic. It’s from 7-9:30. Ironically, it’s a weekend, and I don’t have to be anywhere early tomorrow morning, and the open mic is over before the Venice Cafe open mic usually begins.

Hartford’s open mic regularly has a great group of performers, and the comraderie and friendship among the performers reminds me of the Wabash Cafe. It’s truly the closest I’ve experienced since the Wabash burnt down on March 18th, 1994. 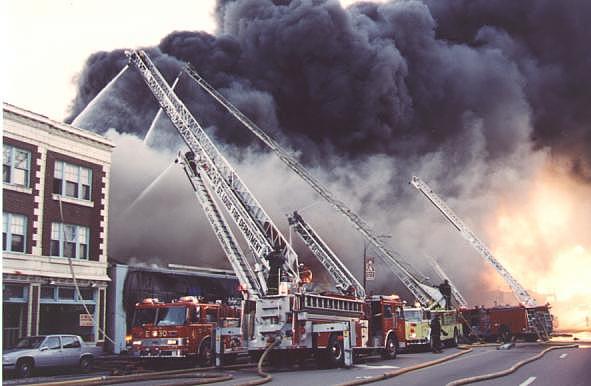 I found the above photograph somewhere online back in 2002 and didn’t write down the URL or any information, and can’t find it online anywhere, so I have no idea who photographed it. The Pageant was built on the remains of The Wabash.

Yes, I know about the contestÂ at 106.5 to win two tickets to the taping of the finale on April 10th.Â  I have entered 4 times.Â  (There are four multiple choice answers, and I didn’t watch the show last night, so I don’t know the answer, but there is nothing on the page that says multiple entries are discarded.Â  I think I could enter 40 times and get at least 10 correct submissions.)

Yes, I know about the contestÂ at 106.5 to win two tickets to the taping of the finale on April 10th.Â  I have entered 4 times.Â  (There are four multiple choice answers, and I didn’t watch the show last night, so I don’t know the answer, but there is nothing on the page that says multiple entries are discarded.Â  I think I could enter 40 times and get at least 10 correct submissions.)

As many of you are probably aware, on May 18th, the long-running television show Will and Grace will air its series finale.Â  (it’s been on the air since 1998) It will probably receive a fair share of the ratings that evening.

Will and Grace was one of my grandmother’s favorite tv shows.Â  Over a period of several years, my brother, sister-in-law, several cousins, and myself would gather at my grandmother’s every Thursday night, eat dinner,Â and watch must-see TV.Â  Grandma said she definitely preferred Friends and Will and Grace over Seinfeld.Â  She also liked Jesse, starring Christina Applegate, and was upset it didn’t last longer than it did.Â  She hated Scrubs.Â  (I think the faster pace of the series confused her.)Â  I’ve often wondered if she enjoyed the shows more becauseÂ she was watching them with her grandkids, but she did have preferences.

My grandmother passed away a few years ago, and she hung on long enough for her out-of-town grandkids to arrive, and watch NBC one last Thursday night from her hospital room.Â

As most of you are probably not aware, I will be watching the episode with several members of my family, at my uncle’s house.Â  Not because itÂ was one of my grandmother’s favorite shows — but that does make it even better.Â Â Â But becauseÂ my cousin will be appearing on the episode.Â  This isn’t the first television show he will have been in.Â  He was in a 2003 episode of The Division.Â  However, more people will be watching Will and Grace on May 18th than those who watched The Division.Â  And if there is a heaven, and there are television sets there, my grandmother will be watching too.

At the end of January I attended an Interfaith Educational Forum. The only thing I had to say when I blogged about it afterwards was how I reacted to seeing my rabbi without a yarmulke. (It was an interesting discussion on the Islamic, Christian and Jewish attitudes about Abraham, but unfortunately the Islamic representative had a very thick accent, and I was most interested in hearing what he had to say.)Recently I learned they had chosen Tuesday night as the night for an ongoing dialogue between participants from the three congregations. I wasn’t surprised that Tuesday was chosen since they asked those who attended the forum which night was most convenient, and the forum was on a Tuesday night.

The first meeting of the Interfaith Dialogue occurred last night. I had agreed to meet a friend who is in the group at the Methodist church at 6:45. Google Maps told me it would take 25 minutes, but I left at 6, figuring I should give myself a cushion in case of any remnants of rush hour traffic and since I had never driven to the church before. (I had been to the church once with this friend for a craft fair, but that was back in November or December, and I hadn’t driven.) It was a good decision.

I knew the address was on Woods Mill Road (aka hwy 141), but I didn’t know the intersection. Following the instructions I had printed out, by the time I passed 141 and Manchester, I decided I had gone too far, so I got off at the next exit, went back on the outer road, and found a Shell station. The individual behind the counter had no idea where the church was. I gave her the number of the address, and she had no clue how close or far away it was. I asked for the phone directory and called the church. Of course, no one answered. It wasn’t business hours. But their answering service told me they were on the corner of 141 and Manchester. I confirmed with the Shell clerk I was on the corner of 141 and Manchester. She nodded. She told me there were a couple churches a little south on 141, perhaps one of those. I was doubtful. That wouldn’t be considered the intersectionâ€¦but I left the building, slightly worried I wasn’t going to find it.

As I exited, across the street, this is what I saw

After laughing, I thought about going back inside and pointing it out to the clerk, but decided to refrain. I had to figure out how to get there, which wasn’t easy, since there was a median I was unable to cross. However, I pulled into the parking lot at exactly 6:45, just as my friend was pulling in too.

The meeting was productive. We introduced ourselves to each other. We discussed what a dialogue meant, what to expect in the future, what we wished to discuss as a topic at the next gathering, and when the next gathering would be.

We’re not meeting in April because there are too many conflicts. (Passover and Easter, primarily.) Our first real dialogue will be May 10th. This is a Wednesday. Because it was discovered that there is a major women’s study group at the mosque every Tuesday night so if we wanted significant Islamic female participation, Tuesdays was actually a very bad night. (The polling they did at the forum didn’t reveal this, because obviously those who were at the forum were, by and large, not the ones in the study group). This made me happy because it meant I wouldn’t miss more writer’s group meetings due to this.

It’s nice to hear that there is an Islamic women’s study group — but rationally, I know this is the US and not Iraq, and I shouldn’t be too surprised.

This week, the Victor Hugo Quote of the Week wasn’t written by Victor Hugo.Â  It was written by Ambrose Bierce.Â  It’s a full poem, I’ve just discovered it, and decided I had to share:

ONE OF THE SAINTS

Big Smith is an Oakland School Board man,
And he looks as good as ever he can;
And he’s such a cold and a chaste Big Smith
That snowflakes all are his kin and kith.
Wherever his eye he chances to throw
The crystals of ice begin to grow;
And the fruits and flowers he sees are lost
By the singeing touch of a sudden frost.
The women all shiver whenever he’s near,
And look upon _us_ with a look austere–
Effect of the Smithian atmosphere.
Such, in a word, is the moral plan
Of the Big, Big Smith, the School Board man.
When told that Madame Ferrier had taught
_Hernani_ in school, his fist he brought
Like a trip-hammer down on his bulbous knee,
And he roared: “Her Nanny? By gum, we’ll see
If the public’s time she dares devote
To the educatin’ of any dam goat!”
“You do not entirely comprehend–
_Hernani’s_ a play,” said his learned friend,
“By Victor Hugo–immoral and bad.
What’s worse, it’s French!” “Well, well, my lad,”
Said Smith, “if he cuts a swath so wide
I’ll have him took re’glar up and tried!”
And he smiled so sweetly the other chap
Thought that himself was a Finn or Lapp
Caught in a storm of his native snows,
With a purple ear and an azure nose.
The Smith continued: “I never pursue
Immoral readin’.” And that is true:
He’s a saint of remarkably high degree,
With a mind as chaste as a mind can be;
But read!–the devil a word can he!

I also just learned that you can search the text of all the documents at Project Gutenberg. (As long as there aren’t more than 1000 hits.Â  Luckily, only 875 books so far mention Hugo.)

Here is the answer:

Â Because it’s freakin’ cold there!

I bet you can’t guess the question

Good WillyÂ  “The Will to Win”Â (an advertising comic from the 1950s, created by Milton Caniff, who also drew the comic strip, Steve Canyon.Â  Some of the language is slightly dated.)

Google announces a new app, I have to try it out.Â  So when they announced GooglePages I was disappointed that they quickly closed it to new customers due to overload.Â  However, I signed up to be notified when they had more room…and they did so today.

(of course, I’m being humorous with the title.Â Â  Now, if they find, or create, a lobster with scales and fins…)